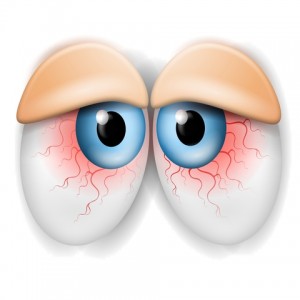 I’m sure most of you could not imagine the extent of my joy a couple of weeks ago when I was finally able to stay in front of the computer for more than an hour. There had been several plans on the drawing board for the last two years, but I couldn’t justify starting any one of them, not knowing if there would ever be any improvement in my vision.

I have been away from much of my work online because text on the computer screen was always blurred. At first, the problem appeared to be worse with only certain programs or browsers. I initially thought it was the back lighting from the screen that was making the text fuzzy. It also seemed as though the light from the monitor was setting off a bright halo within my eyes and generally making things worse. I don’t know how else to describe it.

But, even after reducing the monitor brightness, it didn’t alter the blurred text very much. I could still only endure an hour or so at a time, and then I would have to rest and allow the burning eyes or the headache to subside. I found that I could work with one eye opened and the other closed for a while, still with the same results. Can’t make a lot of progress like that, and it sort of takes the fun out of things.

It All Began With A Detached Retina 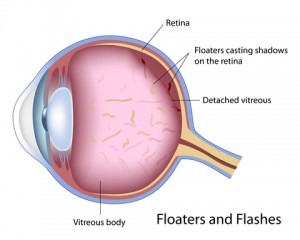 I began experiencing floaters in 2010, but it wasn’t until 2011, when I awakened one morning with half of the vision in my left eye obscured by a dark semi-circle. I had a detached retina. After two surgeries, everything was fine. Then, in 2012, the cataract in that same eye had increased sufficiently to require removal, agitated by the previous surgery.

It was during this time period that computer work became a real issue. I mentioned it during eye exams, but nothing was diagnosed. I noticed that Serif fonts (typeface with the curly-cues – like this font) tended to be more bothersome. Sans-Serf fonts (like Calibri and Tahoma) weren’t as blurry. I also noticed that my iPad display, my smartphone, and an Apple Retina Display I checked out at a local school, all were substantially easier on my eyes. Because of this moderate success, I considered a very expensive high-definition monitor for use on my Windows-based systems, but in the end opted to wait and investigate further.

Finally, during an exam of the cataract in my right eye, earlier this year, my doctor introduced a moderate light source between me and the eye chart, and I could not read it when the light was on. Cataract number two was indeed reacting to bright light, and it was, in fact, hampering my vision. A-ha, maybe this will be the cure. Let’s get on with the surgery!

Although glare had definitely been a problem prior to removal of the second cataract, I continued to be plagued with blurred-text, at the computer. For whatever reason, printed material didn’t present the same dilemma. Out of the office, I noticed that I couldn’t always read street signs or signs in shop windows. Oh, on the highway I could tell a big truck from a small car, I just couldn’t tell you if it was a Freightliner or VW. People would toot their horns or call out to me on the street, but I couldn’t discern their facial features enough to know who it was. 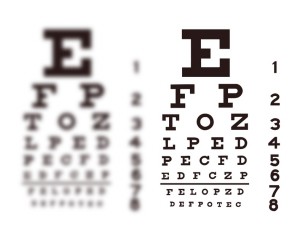 During every doctor’s office visit, I would comment about this persistent problem, especially following the one-eye-then-the-other tests they perform. Those checks were always okay. How about with both eyes open? That’s when it’s an issue!

One day, while working at the computer, a pencil rolled onto the floor. As I leaned over to retrieve it, I looked back at the monitor, and lo and behold, the text was clear. I repeated the action and verified the results. Then I tried swiveling the monitor to one side and then the other. The results were the same: clear text one direction, blurred the other way. Hummm?

Work With Your Doctor

During a subsequent office visit, I offered that I had suffered with eye problems from a very young age and that at one time I had been diagnosed with a “lazy eye”. Some three-dimensional material had been prescribed for me to focus upon for extended periods, at regular intervals, in an effort to strengthen the eye muscles. There had been mixed results, and, nonetheless, I continued to need corrective eye wear, migrating to bifocals in my early twenties.

My doctor then suggested that I perform what is known as “pencil push-ups” for a few weeks. Take any pen or pencil and beginning at arms-length, bring it to the tip of the nose, keeping both eyes focused upon it, all the time. During the follow up to that, I explained that I really didn’t see any improvement, but there was one significant thing I did notice: there were always two pencils, one directly in front of and slightly below the other.

This was confirmation enough for my doctor that there was definitely something else going on. Then he asked me to turn my head from side-to-side and notice the difference in the legibility of the eye chart. Sure enough! When I turned my head to the left, the text was clear; in the other direction it was blurred. To me, this was a repeat of the “dropped pencil” incident.

He immediately wrote a prescription and my glasses were then fitted with a temporary prism on my left lens. The results were immediate. I was seeing things with such clarity across the room I could scarcely believe my eyes. I could even read the paperwork on the optician’s desk with no problem. On my way home, I realized that everything around me was clearer and sharper. Without realizing it, I had succumbed to living in a blurry, fuzzy world. No more! Those street signs – I could read them now. At some point during the ride, as I offered a brief prayer of thanks, I was so happy, I felt my eyes well up and tear.

Don’t Ever Give Up!

I am due back for evaluation next week, and if all is well, a new left lens with a built-in prism will be ordered. This has certainly been a long road, and I do not take anything for granted. I feel much better educated now with regard to the complexities of the human eye, and I do so appreciate my ophthalmologists and their staffs. I am very thankful for my sight and I am truly glad to be back here with you! Call to me on the street and now I’ll know who you are!

The Corner Door Now On The National Register Of Historic Places