News of recent retirements of two people from L. D. Caulk (Dentsply/Caulk, Sirona/Dentsply), in Milford, with whom I had the privilege of working, Mark Silicato and Peggy Johnson, has brought back many memories.

During my time at Caulk, I witnessed a number of changes to the facility and to procedures as the company responded to major changes in the industry. I can only imagine what Mark and Peggy experienced during their 30+ years of service that bookended my tenure.

Looking back now, I can’t seem to recall any of the issues or problems that at the time might have clouded any of our days. I can only remember the smiles and goodwill as we worked together to get things done. 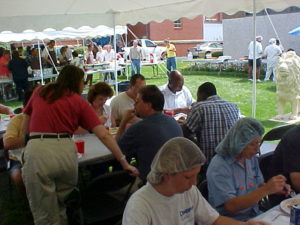 One of the events we always looked forward to was the annual company picnic, for a few years held on the lawn in front of Building 3, on Lakeview Avenue. Tents were put in place the day before and preparations would be in full swing very early on the appointed day. I vividly remember a “Barney Fife” impersonator at one such event.

I took some pictures during the picnic in 2002, and have always intended to share them. Well, I think it’s just about time. In addition, there are some photos from parties for two earlier retirees. To pay a tribute to Mark and Peggy, and in honor all of my old Caulk co-workers, I’ve created a photo gallery over at https://edcarey.com/caulk-photos